No One Is Symmetrical AKA the 1/2 Naked Ladies Blog

Now that I have your attention...

Remember this guy?----->
That's my old roomie from Calfornia. We used to preform together and he's a pretty good guy all around. He's now a professional DJ and hoping to someday become an all around entertainer.

But he said something funny when I was newly divorced and in my "dating" stage.

"You meet the most interesting people. Like, no one is just pushing a pencil behind a desk. They are all like... geniuses or something!"

He was more right than he knew.

Well, my friends are an eclectic bunch. Many are artists, but that's what happens when your hobbies include all-things-Disney and Community Theater. But I have another 'breed' of friends as well.

I say Babes, becuase (to date) all of the friends I've really connected with through Clydas (my Boxer dog) are, well, female.

One of them is the lovely AndiGirl - mother of 3, fitness trainer in training, and pin-up model. Now, AndiGirl has a million professionaly taken photos, which you could say were completely airbrushed, so I picked one taken during a family day at the beach. 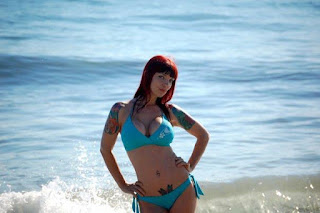 While AndiGirl and I bonded over our mutual love of our Boxers and their unique personalities. Friendships evolve over time and lately she's been a great inspiration in my training. Being someone who was previously obsessed with the"number" on a scale, I always thought that bodies like Andigirls were completely unattainable. But she's one of those gals that reminds me every day that we all have different beautiful bodies - and as long as we continue to push those, we're growing. She's also a living embodiment that "Strong (and sore) is the new 'sexy'."

She's right. Now, I'm not any where's NEAR her awesome bikini body BUT... This can't be reinforced enough!

180lb-me couldn't run a mile if you'd asked me to, but I could turn down bread, fruit, and desserts like there was no tomorrow! I couldn't have lifted 50lbs without straining, and there is no way you'd get me to do 50 sit ups. BUT I was at that magic number! Notice, the hips, thighs and tummy are still rather obvious problem areas? Yeah... those areas are actually smaller now...

NOW - I'm around 220lbish, give or take a fiver (for the 3rd time in my life), but oddly enough, I still wear those exact same shorts I wore when I was 180 pounds! I know what you're thinking - they don't stretch. But I'm more confident now in them than I was when I was in 2009.

This vacation, I subjected a water park to my swimsuit-body for an entire day! And I didn't care if it wasn't perfect. Over the years, I've discovered that 1 peice suits that are long enough for my torso, are HUGE where they shouldn't be, and my size tends to change to so much, that I opt for something sportier - and 2 peice.

So while I'm not yet AndiGirl-licious, I have a better understanding of what it takes to get there, and stay there. Sure, I've put on about 35-40 pounds since that day in 2009, BUT I've gained more than pounds and confidence...

I now do about 2 miles a day on my C25K days. I can lift over 100 lbs. My waist isn't smaller, but my hips are smaller than they were then. I now add weights to my sit ups, and I'm no longer restricted to shakes and bars that cost me $200/month, and restrict my activity level to walking.

Now, I get to eat fruit without panicing!
Sure, it's not ALL muscle, of course. And I'd still like to see the 180's on the scale again. But only if I can move without restriction because I might over-extend my calories per day. I can't really imagine what 180lb me will be like with this sort of training. Probably pretty svelt.

The greatest side effect of working out and lifting regularly has been stress relief. When I was following a restricted calorie, restricted intake diet, I didn't have this as an option. Sure, it made me find other ways to cope with stress other than engaging w/ my dear friend 'pastry'. Back then, if I ate 1 piece of fruit, the scale wouldn't move (or would go up) and I'd flip out a little bit. Now, I pay less attention to the wiggly numbers on the scale, and more attention to how I feel and what I look like.

One handy trick I have - I don't "reward" myself with food after working out. I reward myself by taking a shower using a body scrub I don't normally buy. It's my Post-work-out treat, but I only allow myself to use it if I've worked out. But perhaps the BEST reward is that feeling when you get your blood pumping. (Well, that and a Zico Dark Chocolate Coconut water.)

Future goals? I can't wait to register for the 10 mile or 13 mile race in Disney World this fall. Just gotta decide which after-party will be worth attending.  I'm finally confident that it's a challenge I can complete without being swept.

I may be heavier, but I'm stronger, faster, and, as ever, a work in progress. My left side isn't quite as strong as my right (and I've affectionally named the stronger sides of my body Overachiever and the weaker sides Underachiever), but it's all getting there.

Every work out I come out more confident that if I keep at it, I'll get there.

Walt Disney said it best - "It's kind of fun to do the impossible."
Oh - and as for my old Roomie - he hits the gym every day, and always has.