This past month, I finished a great book I picked up during a closing sale at Borders, and I really enjoyed it.

This book takes place 2040. For the purposes of this book, man developed a cure for the common cold and a cure for cancer! Both were released as viruses into the air. The good news is, no one after the summer of 2014 will ever die of cancer, or catch the common cold. The bad news is, everyone is infected with the Kellis-Amberlee virus.


See, when these 2 life saving viruses got together, they returned the dead to life, with a hunger for flesh and infection. And since they are air born viruses, everyone is already "infected". The virus rarely causes a living person to turn into a zombie. But once they are exposed to more of the virus than is usually found in the air (such as through a blood spatter or a bite or a scratch), then all hell breaks loose. And it's not just contained to humans... any animal over 35 lbs can become a zombie as well. Beef becomes a thing of the past - since cows are now a threat.

But all that happened in 2014. The world has continued to turn since then. We've learned to live in a society where an outbreak can happen at any moment. Security systems have advanced. Blood tests are an ordinary, daily occurance (and yes, Apple has cashed in on this too).  30 years later, our story follows a group of bloggers on the trail of who could become the next President of the United States. 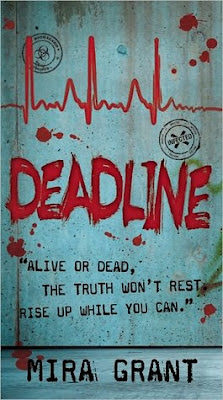 Part zombie story, part conspiracy tale, part political drama, this book had lots of twists and turns in it that I wasn't expecting from a basic post-apocolyptic book. I was expecting something more like The Road, but was surprised when the book had a grounded story that I hadn't seen in that setting before. Sure, some of the techno speak got me a TAD bored but the book kept me riveted enough that I was glad I had picked up the next book in the series - Deadline.

I won't ruin the surprises this book has in store (I'm about 1/2 way through it) but let's just say that, if you thought Shaun was crazy in book one, you ain't seen nothing yet.