Path back! The final MD's visit! 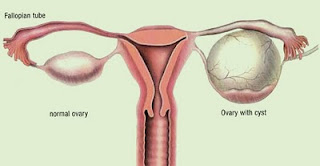 After four months, this medical saga is coming to a close.

And damn, does it feel good.

Yesterday, I had a meeting w/ my MD where we looked over the wounds (which are healing well - just aren't pretty) and to go over my path report.

So far, here's the list of things they found (and a short description to save ya'll from googling):
Endometriosis - Believed to be caused by an excess of estrogen, this is when endometrial cells (which are natural in the body) grow outside of their usual place. This usually causes pain and is a chief contributor to infertility.
Ovarian Mucinous Cystadenoma - This is a benign tumor that grows.... and grows.... and grows... you get the picture. Usually considered a benign growth with the potential to become malignant. They are filled w/ a thick, gelatinous matter and basically won't stop growing until they are removed.
Adhesions - This can most easily be described as internal scar tissue that connects the affected organ to other parts of the body (surrounding muscle/organs/etc). Often causes pain.
Hemorhagic cyst - A cyst that is being filled w/ blood due to a broken blood vessel on the ovary. They bleed into the ovary and cause pain.

Obviously, keeping that ovary would have been moronic to say the least.

Those were the biggies. Again, the doctor was shocked that I wasn't really in as much pain as he thought I would be. (Then again, it's hard to tell how much pain you're in in this area when you are abstinent.)
However, the MD also made another discovery:
The other ovary and all my girly/reproductive parts were normal.

The weight has been falling off. I'm down 6 lbs since my surgery day. 6 lbs in under a month a good, solid, steady weight loss.
The veil has been lifted. I've often felt as though my day to day life was a struggle between my rational mind and my emotional life. As if some veil or cloud of emotions clouded all my judgements. My heavy bouts of anxiety that I coped with just about daily? Nearly gone - or if not gone, easily put into perspective. Living in fear is no way to live. It's so debilitating. But my "I can" attitude seems to come easier now. I feel emotionally stronger and able to handle the ups and downs better.

It's amazing how hormones effect our lives (especially as women). There is a theory that perhaps I haven't had PCOS my whole life. Perhaps it was these tumors growing and growing and this operation has helped my body discover a new normal. It's a little early to tell for certain, but it's stunning to think that the way I've lived and coped for the last 11 years could possibly end now.  I have to admit, I've been in shock about it for a while, but I'm finding that I'm getting happier about it (especially as the weight falls off).
Just wow...
Posted by -J.D. Humenay at 10:16 AM