Today, I saved My Daughter's Life 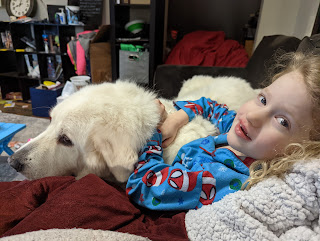 Tonight, I was tucking in the Impossible Girl. As usual, I gave her a kiss goodnight and left her with positive words. Something along the usual (yet heart felt) parental lines of, "I love you. You're an amazing daughter just the way you are." She surprised me tonight but saying, "Thank you for all you do for me, Mom."

This morning, we were playing board games together at the coffee table and sharing probably the best citrus fruit on the planet - a sumo tangerine. Maybe it was the Hungry Hungry Hippos we were playing. Maybe it was just the fiberous fruit, but she stopped playing after taking a bite and started hopping up and down adamently. I looked across the table, thinking she was being goofy, but she wasn't giggling or making any sound. At all. She started trying to hit her back and I realized what was going on. She was choking and couldn't remove the obstruction herself.

I didn't bother with finger sweeps. I tried a couple firm hits on the back, but that was useless. So I shifted into the Himlich as she started to crumple in my arms. On the first thrust - nothing. I called out her name as I felt her crumble towards the floor again, but on the second thrust the bundle of orange fibers dislodged and she coughed. I dropped to the floor catching her on my lap.

The offending blockage was on the floor - a ball of orange fibers about the size of the tip of my pinkie. Just big enough to get lodged in a breathing tube... It wasn't even a seed.

She was breathing though. Terrified. Crying a little. But breathing.

I breathed a sigh of relief and hugged her, validating us both in the moment. "That was scary, huh?" She nodded, not ready to find or test her voice so soon after the offending orange momentarily silenced it.

"Yeah, it was. I was scared too. You did the right thing. Thanks for showing me you needed help."

I held her for a while, helping both of us calm down a bit.

She hasn't turned blue since her infancy. The first time, we were trying to get her into her car seat after a hike. She was under a year and fighting the car seat, crying and crying. Most babies scream and cry so hard they aren't making sounds, then they gasp and take a deep breath to continue their intense protest. Not my kid. She never took that recovery breath. She just suddenly stopped crying, turned blue and purple, and went completely limp and incoherent. Passed out entirely.

It was only about 10 seconds, but it was absolutely terrifying. When we called our doctors and discussed it, we learned about Cyanotic Breath Holding Spells.

The cure? Try to avoid triggers (like, ya know, car seats apparently in our lives... she hated being strapped down to ANYTHING other than a carrier snugged to a human.) and know CPR in case she doesn't come around within 10-15 seconds.

That's it. So from that moment, our lives probably became different from 'most parents'. Or from what I envision 'most parents' experience. Every kid/family is different with their own unique challenges, of course. From talking to my mom friends, we are definately, well, unicorns. Or Narwhals... or Elves... or whatever.

We were out of cell phone range the first time it happened (though only about 20 minutes from town, and there were houses near by). So 911 was not an option.

It taught me that we don't go out of cell phone range without a plan to get emergency help right away. When we travel, I usually have an idea where the nearest help is and how to get it/get to it.

She recovered from the spells, but it was absolutely terrifying when they happened.

So glad we're beyond those years.

Once she was calm and I was calm, we talked about other (more globally recognized) ways to show you're choking. We practiced the hands to the throat. And I said, "What if you're at a table and you're doing that, and you are choking and can't get any air out, but no one notices? What can you do?" She shrugged and we brain stormed. "Well, it's really important so..." I slammed the flat of my hand over and over on the coffee table. She startled for a moment, and then giggled. "It's loud, right? Could you ignore that?" She shook her head no. We tried it a few times and then stayed there until she was ready to move on with the day. She decided she was done with the poor Hippos, and we shifted gears into something else.

She spent the rest of the day literally glued to me. We played video games together, watched a movie, ran an errand, did art, did hair and nails (spa day at home style).

Moments like these remind me that I'm incredibly grateful I was raised by 2 nurses (my mom and my grandmother were both nurses, and my grandmother lived with us from when I turned 5) where conversations like first aid, injury treatment and prevention, and choking came up regularly at the dinner table. And I'm grateful for the first aid and CPR training I've had over the years for various positions. And this is where the ask comes in - PLEASE if you are a parent, loved one, or a care taker of young kids, take the time to learn CPR and other child first aid and emergency response. ARM YOURSELF WITH THE TOOLS TO SAVE YOUR KIDS!Be sure those that watch your kids are armed with the tools to save their lives. Because kids are kids. Accidents happen. And who knew oranges were dangerous? 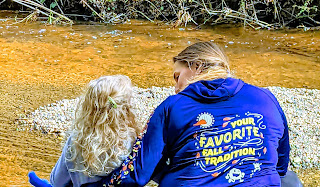 So The Impossible Girl and I had a laid back mom-and-daughter day, where I didn't accomplish a damn thing on my To-Do list while My Sailor went off to the big city to spend some time with his family.

Sometimes the detours leads to where we're supposed to be - not where we planned to be. And that's okay.