Tonight, I Apologized to My 6 Year Old

Tonight, I apologized to my 6 year old.

I mean, it's not the first time I've done it. We live in a house where people make mistakes and The Impossible Girl is getting first hand modeling of how we handle and resolve mistakes and conflict. So kids, obviously, get a front row seat to what's going on.

She's heard me apologize to her before. She's apologized to me before. And this time, it bought me pretty low.

I've grown into a pretty confident parent of the 4-6+ set (so far). I always had a feeling I'd do better with older kids, rather than babies, and that intuition seems to hold true. Or perhaps it's bias confirmation... but either way - it's true.

For the past week, when she got in the car after school, The Impossible girl told me 2 boys at school chased her at recess. I thought it was like a game of tag that had become a regular thing. She'd mentioned the boys before and being friends with them, so I'd ask her, "What would they do if they caught you?" She said they never did. She was always too fast. In passing, she said she didn't like being chased, and then the conversation shifted to something else. I'd encourage her to tell the boys she didn't like it and go play something else, but that was where the topic usually ended.

Yup. I missed it.

I was hearing the words, but I wasn't really listening -

The fact that it came up nearly single every day...

The fact that she dropped so quickly and suddenly wouldn't want to talk about it.

Today, I got an email from the school that one of The Impossible Girl's friends was upset and reported to her parents that being chased was making my daughter sad and she didn't like it.

Basically, I missed that she'd found herself the target of bullying - again.

I was bullied from about 1st grade through about 8th grade. It made my small private Christian school years absolute hell. While the values instilled in me kept me out of trouble, the only thing that kept me from suicide was knowing it would make my parents sad. Yeah - it was that bad. And here we are, in just about 1st grade, and she's been the target of 4 different bullies in about 2 school years. (2019, 2022 - we're not counting Covid years) This time, I'm grateful for a world and a school that is looking out for these kids and is willing to empower the victims of bullying, while pushing to end the behaviors.

I do NOT want a repeat of my formative years.

I want different for her. Doesn't every generation want the next to be better?

I find myself incredibly grateful for that little girl reporting, and for the parents for talking to the school about it. 'See something, say something' protected my daughter.

Because it takes a village to protect our kids.

And because I missed it.

And I would have kept on missing it until probably tomorrow.

Today, I got an email about the situation, what the school is doing to handle it and keep my daughter safe, and some steps they are taking to shift the bullying situation in classes. I am all for it, and asked if there is anything I can do on my side to further instill confidence in her. (My guess, if there is a 'reason' she attracts this it's probably because of her anxiety. Kids seem to sense it and pick on easy targets. So, while I'm not victim blaming here. Kids are strange creatures sometimes.)

I probably wouldn't have missed it tomorrow though.

After I got the email, I asked her about it, and it turns out another boy had joined the chase, and the other two told them to punch her if this boy managed to catch her.

Tomorrow, the three of them may have succeeded.

THEN I would have known.

But in hind sight, it shouldn't have taken me so long to raise an eyebrow.

May The Impossible Girl always have good friends looking out for her when I can't. 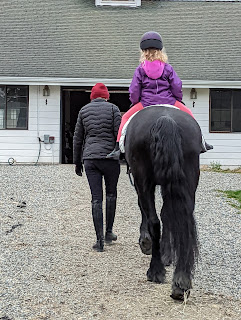 This weekend, she started her adventure in horseback riding - just one of the steps where we see her confidence shine. One the back of a horse, her positive self talk and courage out weighs her anxiety. Hopefully that will continue to carry over into every day life.
But today - I apologized for not really hearing what she was trying to tell me. For not listening to what she was telling me. For minimizing her fear of what would happen if she got caught.... And I encouraged her, if I ever do that again, to THROW A FIT so I HAVE to pay attention. Because her feelings, her fears, her anxiety IS VALID.
As parents, it's easy to write off kids experiences and feelings as 'kid stuff' but I've found that, when kids share their feelings (at least when mine does) it's because they are looking for us to take action or guide them through to an action they can take.
While she's learning to fight her anxiety, wrestle through her speech challenges, communicate as clearnly as stuttering allows, and deal with emotions of missing one parent deeply, she doesn't need bullies toughen her up. Life does a good enough job of that on it's own.
Posted by -J.D. Humenay at 10:38 PM