When the World Paused, Day 378 - The Impossible Girl gets a Rare Diagnosis

I'm going to start with a 2020 Winter Recap. Right now, that's easy to write. Scroll down if you want to see how the title comes into play. 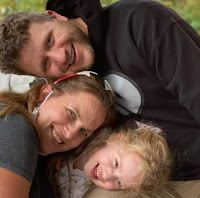 The holidays went by in a flash and I spent a good chunk of time piecing together another package of cards, letters and photos for My Sailor's deployment. This time, it was hard to find photos that didn't include us masked up. It's become a true sign of the times for 2020 and 2021, so far. My Sailor has been vaccinated and it's back to me and The Impossible Girl, who has grown by leaps and bounds. As she nears six years old, I finding a mixture of shock and delight when she shows me what she can do now, that the 4 year old Impossible Girl couldn't do. Speech therapy has become a weekly commute we look forward to, and she's been working on using those mental tools she's learning there to help her speech. 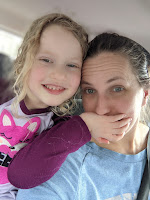 Speech Therapy has been an enlightening experience for both of us. There are motor issues that take some training. We work on it much like I work with clients to train their bodies to do things they didn't think were possible. Only in The Impossible Girl's case, it's learning to get her tongue to touch behind her teeth for a proper "el" sound, or learning to break down works and elongate the "S" sound in words like "Stop" or "spoon". We have a long way to go, but there is lots of progress too. It's a 'big picture' kind of thing. I'm glad we have a President who battles stuttering now. It's something we can share with her as she gets older as proof that it shouldn't hold her back (while we work on strategies to get around it at the same time). I know most 5 year old kids don't look at the President as a role model, but maybe someday it will come in handy. 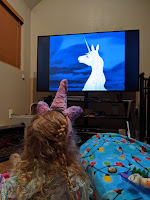 The Impossible Girl and I have instituted some rituals to make the days a bit more distinctive from each other. Friday is Family Movie Night. I work weekends, but it is a nice way to look forward to spending some time cuddling up and introducing her to some classics. Titles have included The Last Unicorn, Muppets Most Wanted, the Aristocats, Peter Pan, and Bedknobs and Broomsticks. 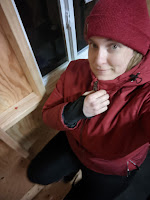 I built a shed to keep working with the lousy weather. They Y DID reopen, but with all the rules still in place, many clients are more comfortable coming to my little space to work out. My evening clients currently have to come to my little space, as child care for a high risk kid during Covid is hard to come by. We still rarely go into stores (her especially). Curbside pick ups are our norm, so when we do stop into a store, it's a quick treat. She's a wonder at wearing a mask without an issue and a wonder about not touching things. Sanitizer is a normal thing now. 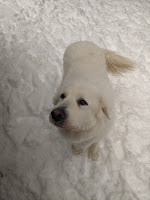 February bought a weekend of being snowed in. Everyone enjoyed that. 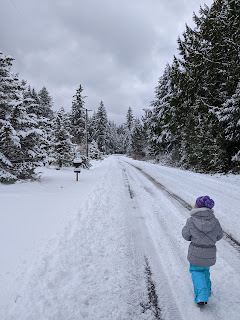 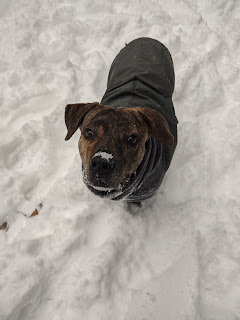 And My Sailor and I spent lots of time playing table and card games before he left as well. 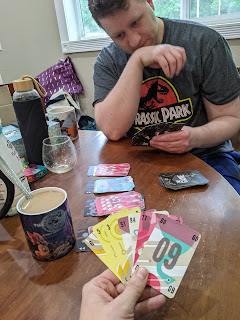 The Impossible Girl went back to Forest School, and, at the time of press, has visited the campus' Kindergarten classroom. She was very excited about it and quick to tell me all she learned on just that one day. 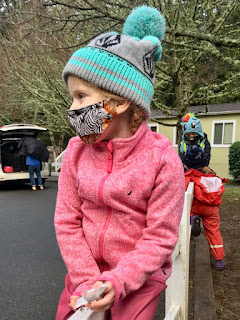 For my 41'st birthday in January, we spent a night in a hotel in Seattle and I spent the Disney gift card I got for Christmas at the Disney outlet store the next day. Usually I'd save it for a trip, but since we have no idea when we're going to be able to get back into the parks, I needed a fix. It was nice to just be out of the house for an evening. 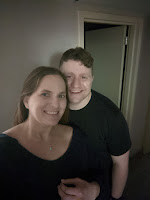 And that takes us all the way back to December. We decided to go ahead and get The Impossible Girl's tonsils and adenoids removed while My Sailor was around to help with the rough recovery.
She was a trooper. We did spend Christmas Eve in the ER when her nose wouldn't stop bleeding - and she was in a lot of pain for about 11 days. Come day 12, she was MUCH better.
Unfortunately...
surgery only stopped the snoring. A recent sleep study showed that the sleep apnea is still present. However it's not Obstructive Sleep Apnea. It's Central Sleep Apnea.

What is Central Sleep Apnea?

To sum up all that Google will tell you - it's a condition that occurs when your brain stops telling your lungs to do their job while you're sleeping. Her case is mild, but I've learned a lot in the process.  Central Sleep Apnea is rare. 1-4% of children have sleep apnea to begin with - so it's not common. Less than 1% of the general population in the US have Central Sleep Apnea, so it's very rare in children without another severe illness. For now, she'll be getting a ring to wear on her thumb when she sleeps. It sends an alert to my phone if she desaturates for an extended period of time, and gives us more information to see if she grows out of this rarity, or if it'll require more earnest treatment. 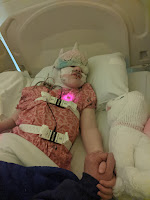 Usually Central Sleep Apnea comes with other, bigger, more serious baggage. Our style doesn't seem to follow that pattern. Is this somehow all possibly connected to the weird hormones she may have going on, being born with Ovarian Cysts? I don't know. I doubt we'll ever have an answer.
But I'd be lying if I said the news didn't rattle me. It rattled me. Significantly.
In her history, The Impossible Girl has come down with pnuemonia starting at 9 months old. Nearly once a year since, she'd get some upper respiratory thing that has sent us in for chest x-rays and medications for pnuemonia. (The excluding years were 2019- 2021 so far.) The reoccurring bouts left us with a mild asthma (likely triggered by viral infections) diagnosis.
Right now, everything is mild and sleep is still better than it was pre-surgery. Honestly, if I had it to do all over again, I probably would have made the same decision. They likely wouldn't have uncovered the Central component until the surgery was done anyway, and her rough recovery is now a distant memory.
As scary as it is to send a kiddo with some questionable respiratory stuff to school during a pandemic, for her mental health, she needs other people in her life. We have a wonderful village of humans in our lives - and connecting with them keeps us sane. She needs people outside of me and My Sailor.
So we plan for the future! The Impossible Girl and I have Covid safe Spring Break plans, and I'm looking forward to a safer future as the world continues to spread the vaccinations around.
I call her The Impossible Girl for lots of reasons. But she isn't just Impossible. She's Remarkable. 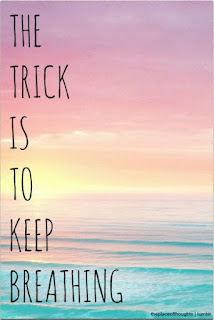 And that's always a good thing. 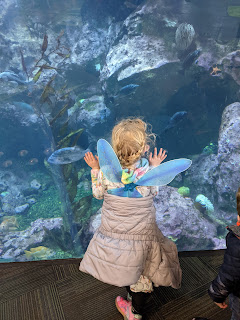 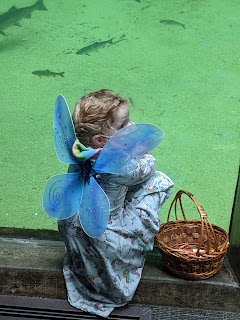