Ringing in a Soggy Spring

Spring is finally upon us here in the Pacific Northwest. Yes, it's rainy up here (no surprise, right?) but since October, we've gotten more rain than we usually get in a year. While it's great for the plants and wildlife, we're REALLY looking forward to some fun in the sun. (And when the sun DOES come outside, we make the most of it. Beanie Girl would LIVE outdoors all day long, if we let her. We're all getting a bit of cabin fever.

Okay, I'm getting a bit of cabin fever. My Sailor is probably wishing for more indoor time. (Destiny...) But I'm looking forward to some summer adventures as things level out here a bit. It seems we're finding a steady routine that's working for us, for now - which is a breath of much needed fresh air for me.

With Beanie Girl finally deciding that food is the latest greatest thing in nurishment (you know, instead of nursing) and all of the junk food now out of the house, I'm looking forward to making some serious headway in losing the discouragingly sticky extra pounds. Since we've found a bit of a routine to life now, we have had a few good talks that I think most new parents have at some point. "Okay, now that we're pretty sure we know how to get this little human safely through a day, it's time to make sure we take care of ourselves." For me, that means taking extra time to get into the gym and lift whenever I can. Sure, I follow MammothHunters simple body weight stuff at home but it's just enough to keep me loose and flexible. It's not going to make me into the athlete I was. Which is fine - it has its purpose and I'll probably keep on it, but if I want to be a lifter, I have to, you know, lift. 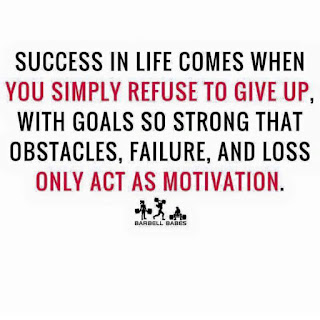 So here I am, breaking out the motivational mantras, taking progress photos, and getting back to the coaches that helped me come this far. I honestly don't feel like I've lost much in the way of technique or strength, but I have about 45 pounds to lose to get back to competition weight. Instead of focusing on the insanity that is the scale, I'll just focus on fixing the lifestyle things that need tweaking (especially now that I'm getting regular amounts of sleep - Wahoo!) and I know the rest will fall in line in time. American Open next year? Maybe. Maybe the year after. We'll see!
In other news, I'm pretty excited to see my family (all together, in one place) for the first time since Christmas 2015. We'll be spending 3 days at Disneyland with them, introducing Beanie Girl to her first theme park experience. My mom is graciously flying us down and helping with hotel stay so we can make this happen. It looks like this will be the year of mini trips, rather than a week long vacation anywhere - but we're really looking forward to this one. It just so happens that it's the same weekend as the Disney Podcast Network meet ups in the parks, so I'm hopeful that we'll get to stop by and meet some of my podcasting buddies and grab some cool swag while we're there. My Sailor really wants to take Beanie Girl to Disney World in Florida while we're still a family of 3. (We're waiting to find and adopt her brother/siblings until 2020.) Since he's likely to become deployable again next summer, we'd like to pull it off sooner rather than later, but I'm sure that will work itself out as well.

It's kind of nice to be in this space. Oh, I can't say can't say things are perfect. 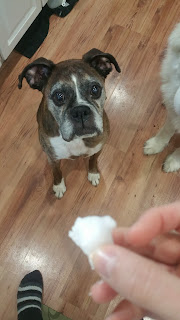 Clydas has a skin infection and has been slowly losing weight. The vet says if we can get a handle on the infection, and if his cancer isn't back and causing the weight loss, than he might be around for another year and a half, but that's likely to be the max. It's crazy to picture life without my boxer buddy by my side. He's seen me through a lot - 5 moves, 1 divorce, countless tears, crazy schedules, nights spent in the theater and days spent in the California sun and Washington rain. He's been responsible for more laughs than I'll ever know how to measure. So we're in the, 'keep him comfortable in his old age' stage now. He was, oddly enough, born in 2002 on the same day Beanie Girl was born in 2015. He still greets each day with zeal and snores his way through each night. 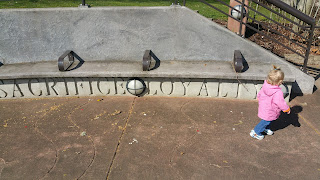 Things COULD always be better.