Picking Up Boxers And The Fat Girl

No, I'm not talking about men's underwear.

Now, I'm not into the boxing/fighting/MMA/wrestling scene, really. I wouldn't recognize this guy if he showed up at my door, but it's kinda fun to do a quick image search for things that are the same weight as my new 1 rep max for deadlifts.

Other things I can pick up include all of these -

And probably the most interesting thing I can Deadlift would be... well... me.
Monday, I discovered I can lift 255lbs in a deadlift. But it wasn't until I sat down to write this blog that I realized, it also means I can lift myself at my heaviest recorded weight. I truly have a new appreciation for just how heavy that is. While it was over a decade ago that I hit that high, I don't think I'll ever forget the weight of the self loathing, the fear, and insecurity I felt every moment of every day. That weighed more on my heart than my feet did on the scale.

But it isn't the weight loss that 'freed' me from that person. That's just a tiny peice of the journey. I am happy to admit, learning I am capable of so much more than I believed has been incredibly helpful. A lot of that journey has happened in the gym, but a lot of it happened out in the world as well. Landing my first writing gig has helped. Then my second. Then the acting/singing in one of my favorite musicals of all time as my first stage performance in Washington. Then surviving the scare that comes with the word 'tumors' and 'cancer'. Learning to find happiness flying solo and learning to balance that with a healthy relationship with My Sailor. Growing new and different relationships with my friends and family. Transplanting from California to Washington... They've all been huge contributors in this journey that's lead to who I am, where I am, now.
This past weekend, I ran into a fellow soccer player who was a little taller than me, but probably well over my heaviest weight. Having "been there done that" myself, I didn't judge her by her weight. As we talked, it quickly became appearant that no one needed to judge her. This girl had already taken the weight of the entire game on her shoulders. She wanted to play a forward because she felt she wasn't fast enough to stop an opposing forward if she were on defense. She felt that if someone got past her on defense, they'd score and it would be her fault.

I remember the position well. The truth is, we KNEW people were staring at us. We KNEW we stood out because of our abnormal size, but what we DIDN'T realize is that we were making the problem even worse by giving power to that microscope we were under.

When I was the 'fat girl' playing soccer, I felt that I should be on defense, because, hey, I'm a big girl! It's hard to get around me.

She didn't want to be the last line of defense, thinking everyone would blame the game on her, but from what I saw of her team mates, that wasn't the case at all. Everyone was very supportive. 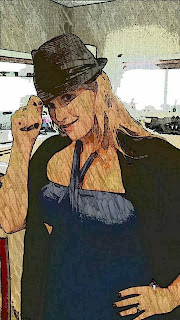 But we all have our own unique journey to travel. I know that, before I was ready, no one could have convinced me either. So I understand where she is. I just hope that someday she finds a similiar desintation.