IMPOSSIBLE Should Be A 4 Letter Word. 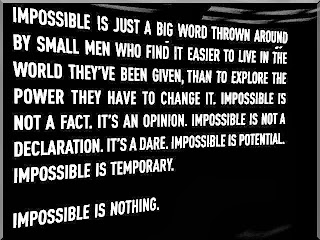 Earlier this year, I set a few goals in my mind while working out. I remember a few of them were:

GOAL: Back Squat over 200lbs, Hit the 100's in all other lifts.
I'm not yet over 100lbs in every lift I know how to do, but I'm there in the major ones. But this week marked a new max in the Bench Press - 100 lbs! I had to do it a few times to get it to be a good solid rep, but it's DONE! I'm sitting here, two days later, and still sore. I forsee LOTS of stretching and rolling out on my foam roller before I head into training today.

But that's where the good news ends right now. While we're saving money (which is always awesome), VA loans don't enable you to take our more than the house's value, which means that we won't be able to expand the house. This cuts down our adoption options considerably.

While our original plan was a sibling group of max 3 kids, girls and boys, this leaves us with only 1 bedroom. So we're debating siblings (must be same gender according to the government, which makes sense - I wouldn't have wanted to share a room with my stinky wonderful brother when I was a kid too), or an only child. While obviously 1 child 'might' be easier for us to transition too, being able to keep siblings together is doing a good thing - and it often helps kids transition since they have someone immediately on hand who is in the same situation with them.

And there is no real hard and fast rule that says we can't try the expansion on a few years, when we have more equity in the home. Or move to a different home. Or decide that the one or two kids we have is family enough for us. If there is one thing the military lifestyle has taught me, it's that the future is never etched in stone. More like 'etched in sand'.

So, even though we've had another detour thrown our way, impossible is just a word.

We will have enough to build a patio, and probably throw in a jacuzzi - so life isn't bad... not by a long shot!

Like the saying goes, "Impossible is temporary."
Posted by -J.D. Humenay at 11:12 AM