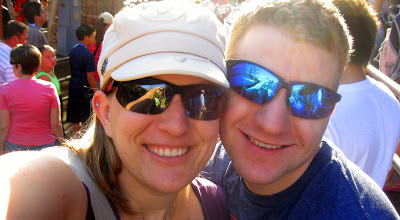 Friday morning came around bright and early! I decided we should We opted to take advantage of Early Morning Magic Hours and we joined our fellow resorts guests in Disney California Adventure. My first few steps onto DCA's new Buena Vista Street were magical. I'd written about it before, but I couldn't believe just how well Disney have captured LA as it should appear in any Noir style film (only cleaner and safer). We couldn't spend much time there though. We were on a mission!

And our mission led us straight into Carsland. 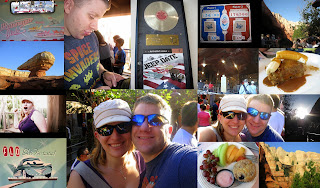 And it was well worth the wait. Radiator Springs Racers lived up all every bit of hype and then some. After we got off, the ride opened to the public. The mob that walked in was immediately greeted by the guiding hands of Disney Cast Members, and the waving mirrors of the Firetruck from Cars (who was parked near the entrance to the ride).

We avoided the crowd and opted for grabbing Breakfast at Flo's V8 Cafe - which was delicious! It was only about 8am and they were already giving away pre-made cups of ice water. Guests didn't even have to ask for them - Cast Members just walked up and offered. Everyone knew it was going to be a scorcher of a day already.

Can you guess who had what for breakfast?


After breakfast, we capped off our morning in DCA with a stroll through to see all the updates and refurbs from the stages for the Mad T Party, soaking in the beautiful Buena Vista Street. We zipped into the other headliner attractions while most of the guests were riding (or waiting to ride) Radiator Springs Racers - The Twilight Zone Tower of Terror, Ariel's UnderSea Adventure, and a bit of the friendliest form of competition on Toy Story Midways Mania.

Afterwards, we went back to the hotel to get some rest. My Sailor took a nap while I spent some quality time catching some rays by the Disneyland Hotel pool. I've actually never been to the Disneyland Hotel Pool before, so it was really great to relax and spend some time there. (As you can imagine, it's pretty rare that I get to do something "new" in Disneyland, so this was a whole day of "new" that I absolutely adored.)

After a bit of down time in the heat of the day, we headed over to Trader Sam's for a Sip n' Snack and to join WTTM's Meet of the Month!  It was great to see Paul and Tairy again, and a couple of our friends joined us as well.

Afterwards, My Sailor headed off to his bachelor party (no pictures of that one) and I headed to the Rainforest Cafe for dinner (which turned out to be FREE because of our loyalty points we earned by dining there with friends and family - thanks all for bringing cash so we could sock away those points!).

After My Sailor left and all was quiet, I realized that I had an evening free. Now, I'll relay this experience as honestly, openly, and accurately as I can.

As you know, most of my bridesmaids aren't kids anymore. In fact, short of my 8 year old little sister, none of them were kids at all. To be more accurate, 4 out of the 5 of them over 21 have kids of their own. So expecting them to all travel to Anaheim, get sitters, and take me out for a night in the Parks or something was simply an unfair, unrealistic expectation I didn't have.  Our wedding didn't have a lot of exterior events. We didn't have an engagement party, bridal shower, or house warming. So having a Hen Night (also known as a Bachelorette party),

So when most of the men in the wedding party headed out for a night of drinking and card playing, I knew that odds are I'd have the evening to myself. Initially, part of me felt that rush of "Oh my god. Did I really fly to Disneyland to be ALONE?! I get this at home all the time!" But after taking a deep breath, I realized that, ya know, the world DOESN'T revolve around me. And I had a choice. I could tap into everything I love about Disneyland and show myself an amazing time, or I could have a pity party. Afterall, I spent many years flying solo at Disneyland. It had just been a while and I was a little out of practice.

So soon after My Sailor left, I headed into DCA. I'd never been to the Mad T Party, so I headed that direction. I was a fan of ElecTRONica and was sad to see it go. I had my doubts about how awesome the Mad T Party would be. My doubts were misplaced. It was a GREAT time. The bands and dancers were great! After that, I grabbed a couple goodies at a new bakery on Disneyland's Main Street.- The Jolly Holiday Bakery.(I wish I would have taken more photos or videos of my night. )  I capped off the evening in the parks with Fantasmic (from a prime viewing spot - which is so much easier to land when you're alone... and 5'9").  After that, I went back to the room. I turned on the TV and finished painting my nails.

I got a call around midnight that my Matron of Honor and her family just checked into their hotel, and another that our officiant and his wife made it safely to their hotel after lots of travel delays. I wasn't expecting My Sailor back until the next morning, so I tucked myself in and got some rest before the great Character Breakfast with the Matron of Honor's family in the morning.
Posted by -J.D. Humenay at 9:09 AM