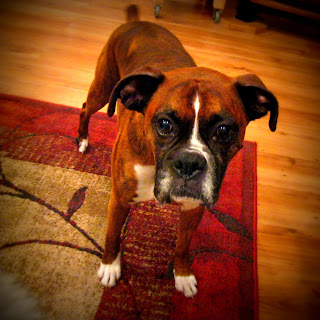 If you've followed this blog for any length of time, you know about my amazing Bootie Brindle Boxer Boy, Clydas. He's been a great companion over the last 8 years of his (and my) life. In fact, in so many ways, we've rescued each other. When I was at my lowest, having Clydas in my life helped me get up some mornings. When I got complacent, he begged me for a walk, and sometimes that's all I needed to pull out of my rut. When I couldn't laugh, he found it through his antics and always brought back my smile on a daily basis. When I needed a foot warmer, he was always more than happy to curl up on my feet and guard my dreams. During my swingin' single days, my friends often joked that Clydas was the most stable man in my life - which always made me laugh (even if ironically). I never anticipated, when Clydas came into my life, that he'd be capable of feedings the human spirit in such a unique way. Yes, I grew up with dogs, but Clydas is MY DOG. My first dog. And sometimes that means everything. 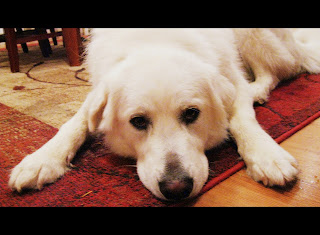 Now, Odin came into my life in a different way all together. Instead of a pet store or a breeder, Odin is a Humane Society rescue. A pure bred Great Pyrenese, it was very unusual to see one of these turn up in a shelter. He's about 1 1/2 years old with a very friendly disposition. The Humane Society worked with him to get him obedience trained (he's great with all the basic commands) and he's already been fixed and well vaccinated. So why was such an amazing boy surrendered? Well, according to his previous owners, he grew up on a farm and couldn't be trusted alone with the chickens. (Apparently he chased them until he was told to stop, which is probably a mild way of saying Odin likes his chicken raw.)

The Great Pyrenese has never been on my "must raise" list of dog breeds. (Oh yes, in case you were wondering, there IS a list!) But he fit the bill in that he is a large breed. At 75lbs, he'll probably fill out to a good 85-90lbs by the time he's done bulking up.  He actually doesn't eat much more than Clydas, due to their slow metabolism and he LOVES kids. I mean seriously... He nearly let a 3 year old poke him the eye TWICE! (He didn't snap or anything. We adults caught the culprit just in the nick of time.)

So now Clydas has a buddy! A buddy who is already pretty well behaved, is housebroken, obeys commands, doesn't chew on anything he isn't supposed to, and is already "fixed".

We woke up Sunday and bloody mucus all over the floor of the bedroom. Poor guy either had an allergy or a sinus infection so bad, he was sneezing so hard it was bloody! He's getting better by the day (after a visit to the vet and much pill cramming). So we have to clean the carpet.

Oh yeah - and he sheds - A LOT! This is the mild season as I'm vaccuming twice a day just so I can see the color of my dining room rug. I'm far from a neat freak, but I'm pretty "anti-dog-smell" when it comes to the house. I own dogs. I don't need to smell like 'em.

So there is your into to our new troublemaker - Odin!
Posted by -J.D. Humenay at 9:02 PM