We woke up as late as we wanted the next day and The Impossible Girl soaked up the city from her perch on our hotel room window before we headed downstairs for breakfast and were off to La Brea Tar Pits.
This place had been on The Impossible Girl's bucket list since 2020, when we watched a family on Youtube visit it. (You know, that time when The World Paused and we lived vicariously through the past adventures of YouTubers and their families.) We hadn't been able to make it happen before, but this time, we planned for it. 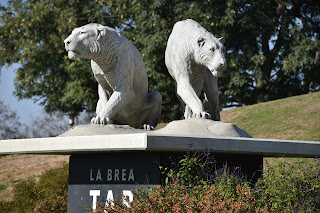 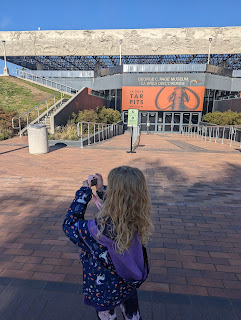 This was the perfect road trip break destination. The park surrounding the museum is fenced in and very well maintained. It's a facinating place, not just because it's beautiful, but because it's history in the making. There are little bubbling tar pits all around the park. They are marked off by bright cones that say "Messy" or "gooey" on them. Larger areas are chained off to avoid making park-goers part of the exhibit. The day was beautiful and clear - and the air, of course, smelled mildly of sulfur.
The exterior of the museum is stunning. 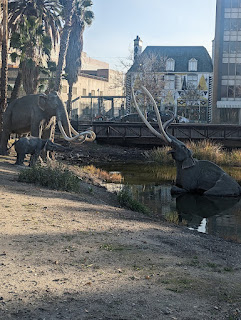 This place is a science lesson that's fun and nearly tangible. The lagoon out front shows the dramatic scene of how animals may have been trapped in the tar. Perhaps this mammoth was walking through what appeared to be a puddle of water - but was actually a tar pit where water had collected on the surface. Now he's trying to free himself, but if anyone tries to help, they too will become trapped. One of nature's booby traps. 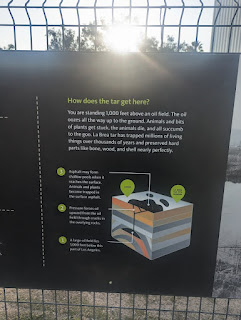 The park is free to visit (aside from parking). The Museum was free to My Sailor. The Impossible Girl and I weren't free, but I think the overall cost was about $25 for both of us. The Museum is small, but I will definitely be back. It's a great way to pass the time and look at all of the things they discovered here - and explore how different Los Angeles may have been in the time of the Mammoth and American Lions. 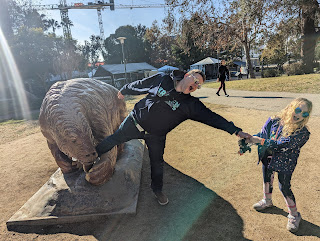 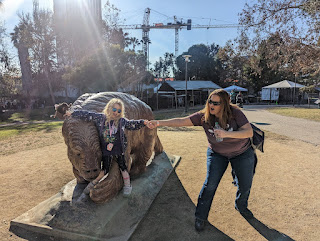 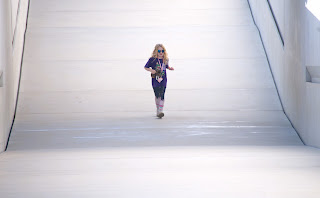 It was SO NICE to eat outdoors in DECEMBER! It's something we don't really do in Washington (without some serious cover and heaters to help). Everything was pretty good. Can you spot the new traveling buddy who came along from the gift shop?

After lunch, we walked around the light post exhibit on the street out. It was a hugely popular photo spot, and we contributed to that before walking the few blocks back to the car (very tired). We had one more destination in mind before heading back to the hotel.
After a short drive, we parked at The Grove and found some dazzling decorations.  The Impossible Girl got a delicious way to cool off thanks to this marvelous candy/ice cream shop. (Seriously, it was some of the BEST ice cream I've ever had.) 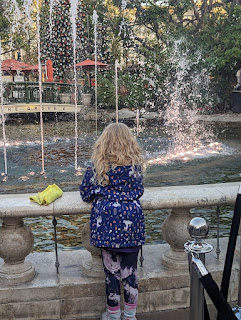 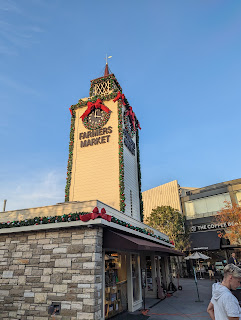 The Farmer's Market was the goal for today. I grabbed a caffeinated pick me up at The Coffee Bean & Tea Leaf (which we don't have in our neck of the woods - I miss their Winter drinks) and we strolled into the Farmer's Market. We said our hello to The Travel Angel and walked around the market for a while, exploring. 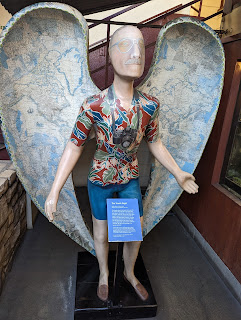 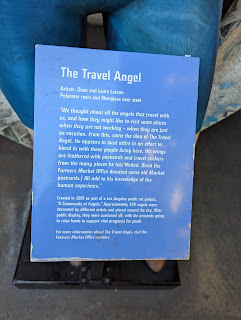 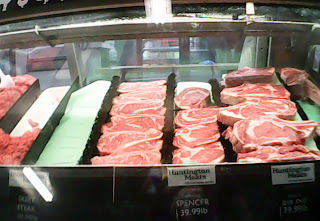 This is one of the first farmer's markets in the area and reminded me a bit of Pike's Place in Seattle - with more full service food counters. We enjoyed the stroll through all kinds of foods - from seafood, to cooked Indian and Chinese, to fresh sushi and cuts of steak to take home. I know if I was a local, you'd find me here on the regular with a cup of coffee and something scrumptious. 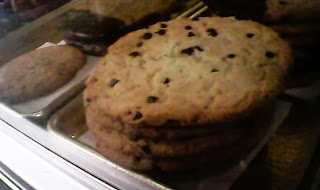 We ended up grabbing a cookie to split at a local pastry shop and heading back to the hotel for the evening. It was about 5pm when we got back so we made it a 'movie night' in at the hotel. My Sailor ordered California Pizza Kitchen pizza (from a California Pizza Kitchen - not the frozen kind we have access to in our local grocery stores). We watched a movie from our hotel bed on a laptop and called it a night early. The next day was going to be extra exciting.
Traveling with someone with Sensory Processing Disorder has taught me to truly slow down, savor, and process the little stuff. A visit to a cool new park and the farmer's market were a lot of fun, but also just a lot of new sights, smells, temperatures, textures, tastes and sounds.  Before I had a kiddo, I never even really considered that SPD was an actual thing. I thought it meant that a kid melting down just needed a nap or their parents were pushing them too hard. I thought kids wearing headphones were being rude - but then I learned first hand how helpful such tools can be.
And when we know better, we do better. 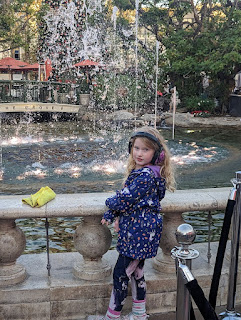 Now I know the kid in the headphones may just be making the world quiet enough that they can hear themselves think. The kid that needs carrying may be tired and too overwhelmed to take a few more steps. Having a plushy friend on hand gives the hands something soft and comforting to squeeze and something complete benign and 'safe' feeling to interact with when anxiety and excitement feel the same. 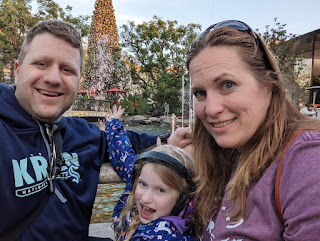 I'm very grateful that I'm able to use the tools we need to use to help us have a great time. They help us stretch our fun and slow down for the sweetest parts of life.
Life is a constant game of adaptation. We're constantly adapting to everything around us. Some situations and things are easy to adapt to. Some take some more creative thought and patience.
There is so much more that I didn't think to take photos of - and I'm so grateful for this little family that reminds me to live in the moment.
And I think we'll be back to Los Angeles someday to explore more amazing museums - and MAYBE finally get a goodie from the Farmer's Market.
Posted by -J.D. Humenay at 8:07 PM