Like most good Disney Park goers, we woke up early (or tried to) to be at the Animal Kingdom park at Rope Drop. Our DAS (Disability Access Pass) ride reservations weren't until later in the day, but we were hoping that Guest Services could change them for earlier, or we'd be able to do a few things with minimal waits in the morning. 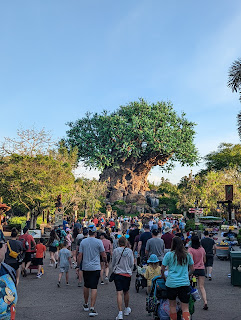 Animal Kingdom is probably one of my favorite Disney Destinations. It has a rich atmosphere and is usually far less crowded. It has a pace that feels like a refreshing breath of fresh air, but at the same time exhales the anticipation that comes with the prospect of great adventure. Needless to say, I'm a fan and it's always my first go-to upon hitting up Disney World for a vacation.

Knowing the Impossible Girl through our previous Disneyland trip, we figured the slow strat that the Animal Kingdom afforded would be a great place to start.

Well, our previous early morning arrival took it's toll on everyone and our West Coast bodies were never going to be ready for Rope Drop. We arrived at the Animal Kingdom shortly after the park opening.

She was feeling a little bit anxious and we wanted to be able to walk quickly, so she hung out in the carrier to start the morning off. The Impossible Girl and I hopped in line for the not-yet-open Kilimanjaro Safari attraction while My Sailor ducked into a nearby store and saved the morning with Starbucks for breakfast. The line moved quickly and was outdoors and pleasant. We made it into the boarding area and that's when The Impossible Girl suddenly didn't want to go on the ride. We kept encouraging her and let her out of the carrier right at boarding. She sat next to My Sailor and hung on until she got her barings and saw the animals.

It was a GREAT safari. I'm so glad we went first thing in the morning, rather than taking our DAS pass up for a 3pm safari. We also set up DAS for the Navi River Journey (a calm boat right through the night time jungles of Pandora) and we had a DAS set up for Flight of Passage. 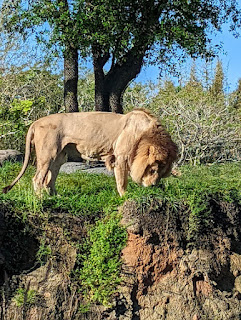 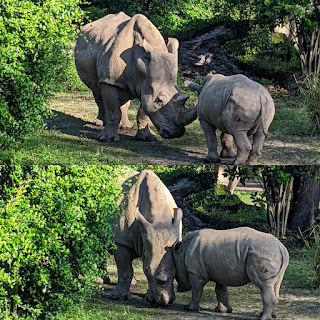 The Safari was fantastic. It's definately an early morning attraction. I'd been on it in years past, and this was the most active safari with the most animals I've ever seen. It was beautiful. (I mean, we missed a photo of a giraffe that crossed the path right inches away from our vehicle.)
The Impossible Girl had still opted not to eat much yet, so My Sailor stopped and grabbed a snack he knew she'd go for (some sort of chocolate filled pastry, if I recall correctly, and a dole whip to share). After we bought her a buddy for the rest of the day (Simba) she sat down and felt like the world was too loud. Noise cancelling Galaxy headphones to the rescue! Who could blame her? An African inspired precussion group starting playing near by. I couldn't stay in my seat. My Sailor sat with the kiddo while I jetted over to the stage to listen, watch, and shimmy along to a song for a couple minutes. He realized that we weren't going to get this oppurtunity again, and I'm so grateful for a partner who is incredibly helpful. 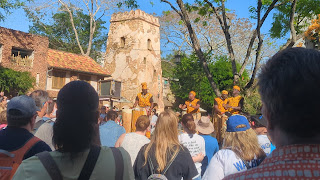 After wards, we tried to capitalize on a good experience on the Safari (and having some sugar on board) and go on the Maharaja Jungle Trek to see the tigers (one of The Impossible Girl's favorite animals) up close and personal. 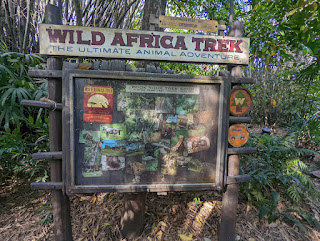 Though she had a great time on the safari, and we encouraged her bravery for enjoying it, the environment was still new and different and getting more crowded.
We stopped to take a couple of fun photos before delving into the Maharajah Jungle Trek. 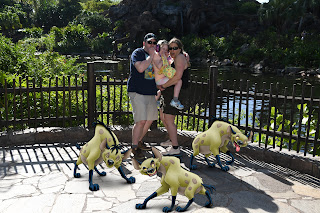 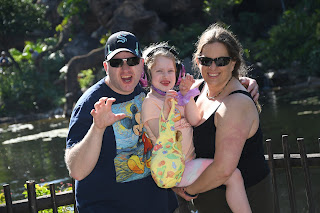 We flew by most of the exhibits and really enjoyed them. It was a little busy but not too crowded.
When we got to the bat house, it took us about 45 minutes to get her in the door. The bat carvings above the door scared her a lot.
Dad, once again, came to the rescue, bringing in a Mickey bar onto the trail. We sat down and talked and worked to help her feel safe enought to walk through the exhibit to check out the tigers on the other side. It sounds like a lot of sugar - I know. But we were on vacation and we knew the effect it can have on anxiety (hello dopamine!). So, yes, we were relying on those dopamine highs to get us through the day post-overnight flight. 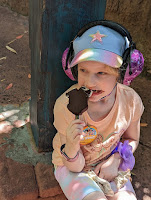 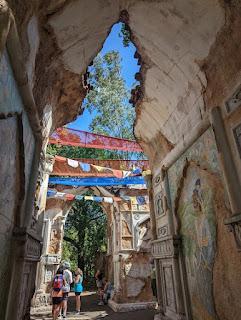 We ended up seeing 2 napping tigers in the shade before heading out. We didn't attempt the Aviary. It was indoors, and that, at that moment, felt like too much.

We headed over to a Guest Services tent to reshuffle some of the DAS reservations we had for rides. The Cast Members were wonderfully helpful, going above and beyond to ensure we had a good visit. Next on the DAS list was the Navi River Journey attraction, which was all the way across the park. The Friends of Flight bird show was starting soon, and that was on The Impossible Girl's MUST DO list, so we popped in to do that.

Dad helped quell the anxiety that was sneaking up while we waited by engaging in fatherly funny face photos. My Sailor has always been very connected whenever he can. 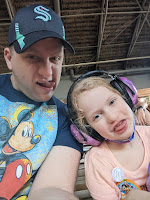 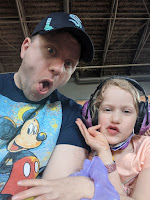 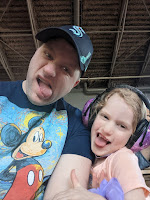 By this point, we were starting to realize that this trip would be different. Not just because we had The Impossible Girl along to share the experience, but we also had a hichhiker. Anxiety was along for the ride this trip.
After the bird show (which was a huge hit, and I highly recommend making time for it), we headed across the park to Pandora, passing by Dinoland USA. The Impossible Girl was begging to return to the hotel, but after seeing the Triceratops Spin and the Dinosaur themed playground, she couldn't wait to play for a bit. 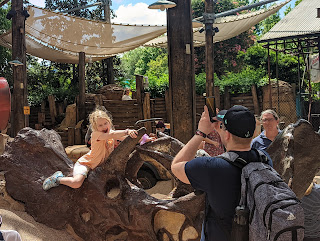 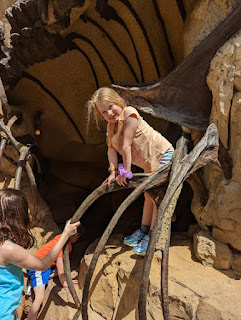 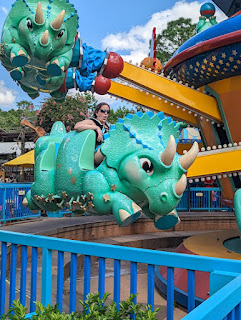 The pace was slow and relaxed. We still had our DAS pass for the Navi River Journey, and I'd heard great things about the Santuli cafe for lunch. After some time in Dinoland, we headed into outter space - er... Pandora.
Pandora was astounding, but it was hot and decidely different. Lunch at the Santuli Cafe did not disappoint. It was great that it was simple counter service. We did a mobile order and hung out in an air conditioned shop while we were waiting for our order. We thought food might help our hitchhiker quiet down so we could enjoy the peaceful boat ride that is the Navi River Journey.
Well, anxiety had different plans. Dining inside the large cafeteria was fun, but ended up feeding the hitchhiker, rather than starving it. Soon, The Impossible Girl was feeling fearful. She'd barely eaten most of the day (Mickey Bar aside). The hitchhiker was in the way.
It was clear that the Hitchhiker was in the way. While we hoped we'd be better at reigning it in, the usual devices weren't working quite as well as they had in the past. The world was louder, bigger, hotter, and more crowded.
That's when I realized that I had a choice.
A choice that could make or break the rest of this trip for me.
I could adjust my expectations, or I could keep pushing to do things our hitchhiker clearly was making next to impossible.
I choose to accept that this trip was different. That it wouldn't be anything like what I'd prepared for. And I choose to have fun with my family, and course correct my own expectations.
We talked her through her fear so we could finish our food and then headed back to the hotel, canceling our DAS appointments on the way out.
We made it through 3 attractions - the Safari, the bird show, and the tiger trail.
And for today - that was enough.
We stopped for a quick photo in front of the Tree of Life - 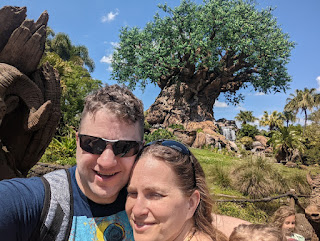 and napped in the carrier on the way back to the bus stop. 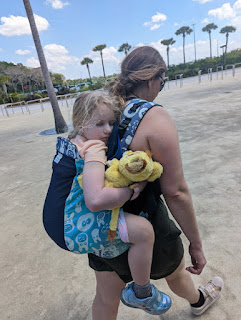 Once at the hotel, we recovered from a long day, ate dinner, and spend some quality time in the pool, hoping with a little extra rest behind us - tomorrow's Hollywood Studios day would be maybe a little more magical.
Posted by -J.D. Humenay at 12:32 PM