There is no doubt there has been a lot of change in the country right now. Our day to day life looks pretty much the same as it has for months now, but that doesn't mean the world hasn't changed considerably over the last few weeks and months.

As of tomorrow, I'm seeing my first client face to face since MARCH. Their patience has been amazing. And there are still clients I can't see face to face because they are over 65 or have a chronic health condition. Within the midst of all that, the disease of apathy is being challenged in our world - as it should be.

Every single day, 'The Mickey Boat' experience comes up. I know cruising and vacationing is going to completely change for the coming year or two - and we took a lot of flack for going on a family vacation on a boat, unreachable, over Christmas, but - especially with all of this isolation going on- I'm thrilled that we had this experience to look back and draw from. It was completely positive and worth it. 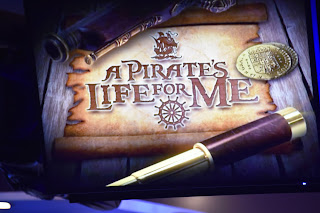 Pirates in the Carribbean

We spent the day walking to a small beach and relaxing in Grand Cayman - stopping at a small park to learn a little about the place we were visiting. (It's a travel requirement of mine. Learn something about where you're visiting while you're there.) 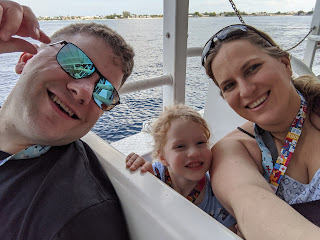 It brought back so many memories of when I was her age and my family went to Grand Cayman a few times (usually over Thanksgiving). Watching the Impossible Girl run and play in the sand and the waves, discover hermit crabs, and different shells than we see in the West Coast was a journey into some of the best moments of traveling as a child. 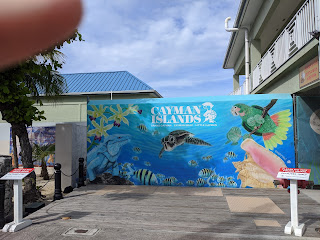 We came back to the boat for lunch and the kiddo took a nap while I, well, did laundry. 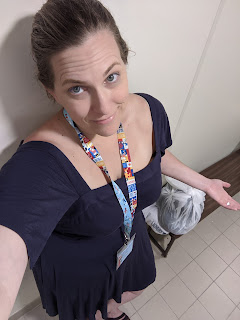 But the mood changed soon enough! 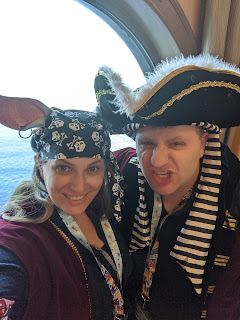 It was time for Pirate night! We all dressed up for Pirate Night! It was so much fun. We played a game in the club called Pirate's Life and even spoke in 'Pirate' for the rest of the night.
'Argh!'
I was excited to do the Pirate deck party, but our smallest pirate needed a nap during dinner. 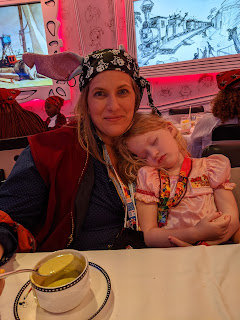 One fun memory -
Since we were speaking in pirate, I was helping The Impossible Girl out in the bathroom - while speaking pirate. (She was doing it back, so it was fun.)
I think the exchange went something like this -
Me: "Argh Matey! Don't Farrrrget to wipe yer butt! No Pirate wants a bum like a blige!"
Her:"Argh! "
Me:  "Argh!"
(She flushes and we're on our way out.)
Me: "Now we've got ta' go warsh yer grimey hands matey!"
Her: "Argh!"
At this point- the 3 other women in the bathroom are laughing hyterically.
(Yes, we didn't buy alcohol this night. I was completely sober.) 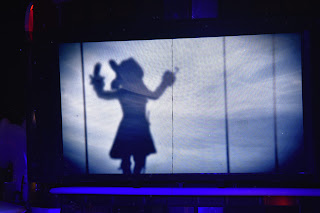 We made it to the deck party just in time, and danced and watched and had a blast. We had the last standing room in the boat, but we could see and hear everything, 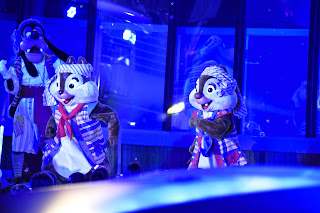 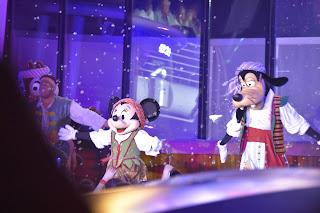 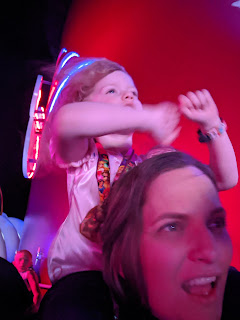 After Captain Mickey saved the boat from Captain Hook (and a LOT of singing and dancing), the evening rounded off with some ice cream by the pool. I couldn't help but say out loud -
"Is there anything cooler than watching Pirates of the Carribean outside while sailing on the Carribean sea?" Even the memory of it all still strikes me. 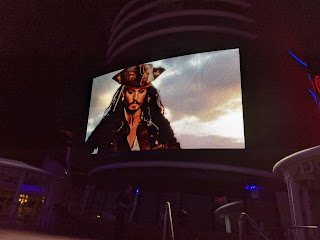 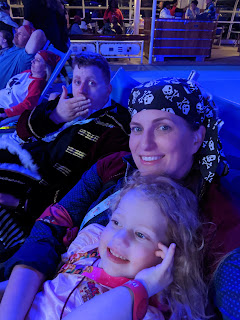 And we ended the night back at our rooms with a kraken blanket/towel animal from our room steward. 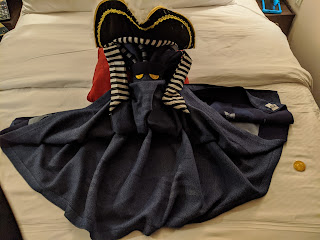 We were acutely aware that we were incredibly privledged to have the ability to do this.  Some of our fellow guests sailing on the ship have done them over and over for years. I have no idea if we'll ever be able to do this again. It truly was once in a life time. 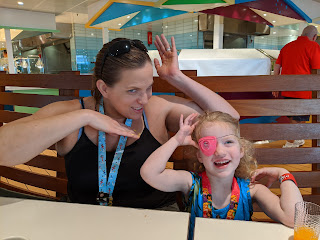 We celebrated with people who celebrate different holidays than we do, ate and danced and chatted with people from all over the world (some fellow guests, some crew members) and enjoyed a glimpse of something completely different. 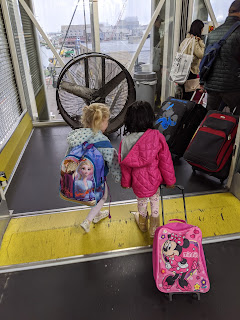 The quiet ways that traveling and being open to others can change the way we see the world is amazing. I look forward to The Impossible Girl making new friends with new hands to hold someday soon.

But for now, the world is closed. 'Because Germs'.
When we miss playgrounds and movie theaters and friends and child care, we are always brightened up by conversations and thoughts from our week on the Mickey Boat. 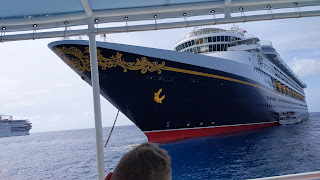