The True Story of the Paper Tree 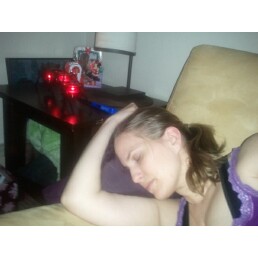 A 14th generation Southern Californian Natived moved to the Washington Kitsap Penninsula, following a dream and her heart.  She found a tiny apartment to move into to get her feet wet (ha ha ha) and learn about the area. The apartment had just enough room for her things and that was about it. Since she moved in during the Spring, she'd given little thought to what a Christmas in the tiny apartment would look like. For her, Her Sailor, and Clydas (the Boxer dog), it was 865 square feet of living space that fit them just right for a start.

When the seasons turned colder and the days turned into holidays, the young Sailor was out to sea, so it was up to the girl to decide what kind of Christmas she could do. She knew Her Sailor wouldn't be back until long after. Any live tree would die and the tiny apartment didn't allow for storage of a fake one. (Besides having grown up with a real tree, anything less seemed less festive by far and hardly worth the investment of energy.)

So thought long and hard... she enjoyed the holidays, and knew she'd need something,  but with no floor space, where would she put a tree?  And would any live tree still be alive when Her Sailor finally returned?

She got creative and went on a mission for butcher block paper and water color paints. She asked at a few stores until she finally found a Fed Ex Office store who was understanding of her plight. Though it was against company policy, the kind worker cut off about 6 feet of paper from a printing machine designed to print out large scale blue-prints and the like. Grateful for the contribution, she stopped by a craft store and picked up the necessary water colors and set to work.

She worked long into the night, and the end result more closely resembled the workmanship of a 5th grader than an adult. Instead of ornaments, the tree was decorated with scrap book stickers. It took several hours to complete, and used up nearly all the green in the water color kits, but it was finally done. 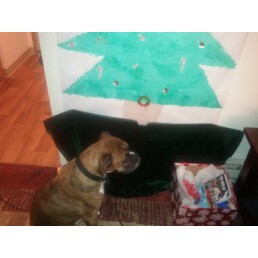 She pinned it to the wall, pinned her tree skirt under neath it, and sat a box nearby with gift for Her Sailor to enjoy upon his return.

The bewildered Clydas didn't seem to know what to do about it, but was happy to stand guard over the package and the strange new addition to the wall...

Later on, the paper tree was folded and put away, until the next time Her Sailor went under the sea over the holidays. Then, it traveled with him, along with everything he needed to affix it to his rack to remember the holidays and think of her. 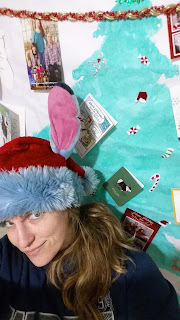 Now, the same paper tree gets unrolled every year and displayed in the house before Christmas. This year, it holds all the Christmas cards they've received. It's hard to believe the little, imperfect tree could hold so many well wishes, but it still holds up today, even though a real Christmas tree (complete with actual ornaments, lights, and a few scattered gifts stands a room away). It may be a bit faded, and may be mistaken for a child's art project, but the tough little Paper Tree, tattered and wrinkled, has yet to lose its needles - and no doubt has many other travels in its future. 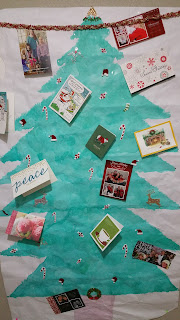