Take It From An Under Dog... What Breaks You, Makes You.

I spent the first few months of my life in Foster Care. By just about every definition, I started life out as an under dog. The product of an unplanned pregnancy, receiving little to no pre-natal care, I came into the world as an under dog. In fact, it took infant CPR to get me breathing. But I made it.

Being an underdog is practically my birth right. It's in my blood.

And it hasn't stopped in my adult life either.

Earlier this year, I competed in my first Crossfit Throwdown.   Enrolled at the last minute, I walked into my first Crossfit box alone - and not for a workout, but to compete.  My Sailor had recently deployed, and Trainer Guy was unable to attend.  If you've never been into a Crossfit box, most look like a large, industrial space. A few scattered weight racks and various kettle bells, medicine balls, 12-30 inch wooden boxes, barbells, and rubberized weights litter the space. There are no mirrors, but more than a few people who will make you question your fitness level loitering about.

To say it was 'scary' would be the understatement of the year. It was all I could do to quietly swallow my panic.
I doubted I would place. I suspected weight lifting would be my strong suit, but looking around at all of the fit people surrounding me, how in the world was I going to compete with these people?! I didn't even go to a Crossfit box! I trained at the YMCA!  I was easily on the heavier side of the women competing, tipping the scales at about 210 pounds (at the time). Part of my brain screamed, "What's a fatty like you doing here?! You are SO out of your element."

But I was there. I had snagged a highly coveted spot to participate and, let's face it, what was THE WORST thing that could happen? I'd fail and be embarrassed.

A few friends showed up to support me, which was invaluable. They were the positive voices that drowned out the panic. They were also the accountability I needed. Sure, all I could think of at times was, "Geeze, my belly is bigger than fill-in-the-competitor's... What am I doing here?!" But what the hell - I was already there. Might as well. 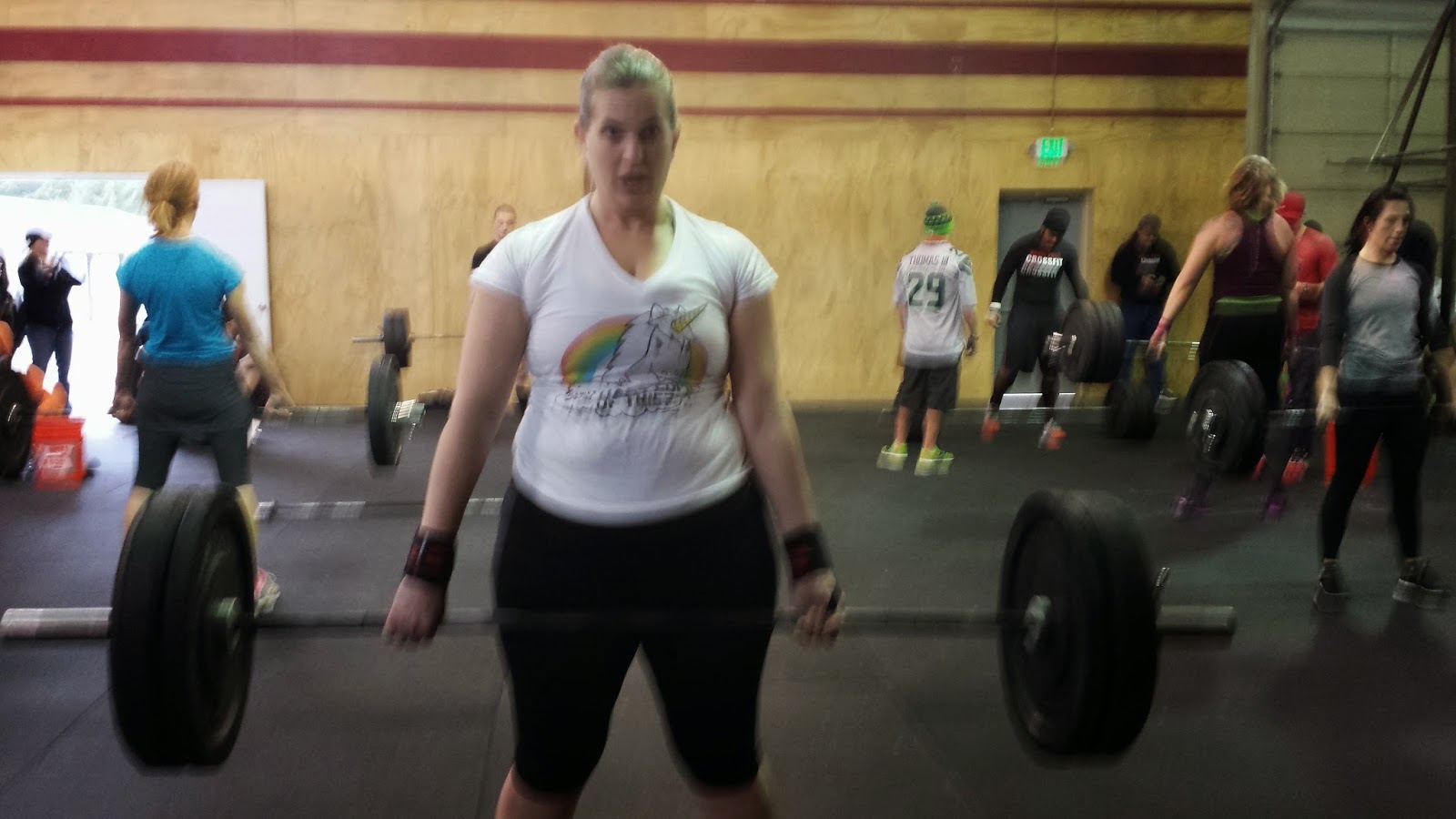 So I swung, lunged, burpee box jumped, lifted, split jerked and thrustered my way through it.

And, what do you know, I took 3rd in the first event! Me! The underdog who had the odds stacked against her from the start. Every other competitor was familiar with Crossfit boxes. I'd never even gotten past the door way of one!  While that's largely a testament to the work with Trainer Guy, it also is a great example of what's possible when we get out of our own way. Ever time I wanted to walk out, I wondered, "Yeah, but what might be happen if you didn't?"Life isn't about 'winning' everything.  Life also isn't about having the flattest belly either (thank GOD).

Even more recently, I finally lost the 30 pounds I'd aimed for nearly 2 years ago.  Sure, I celebrated a bit and smiled when I hit that number, but it didn't trigger any thoughts that I was 'done'. Now, the goals have changed. Sure, I've lost 30 lbs, but, if I were to listen to one voice, I would hear, "It's not enough. You still have that extra skin. You still have thighs. You're still a 'big girl."  But, if I listen to the other voice, I'm reminded - "Man, when you started, the BAR was heavy. Now you can dead lift over 300 pounds. You can clean over 135 pounds. You can back squat around 230 lbs. You can rock climb. You can run fast and without pain! Sure, your still a big girl - but no one messes with you! And hell, look at all you can DO!" 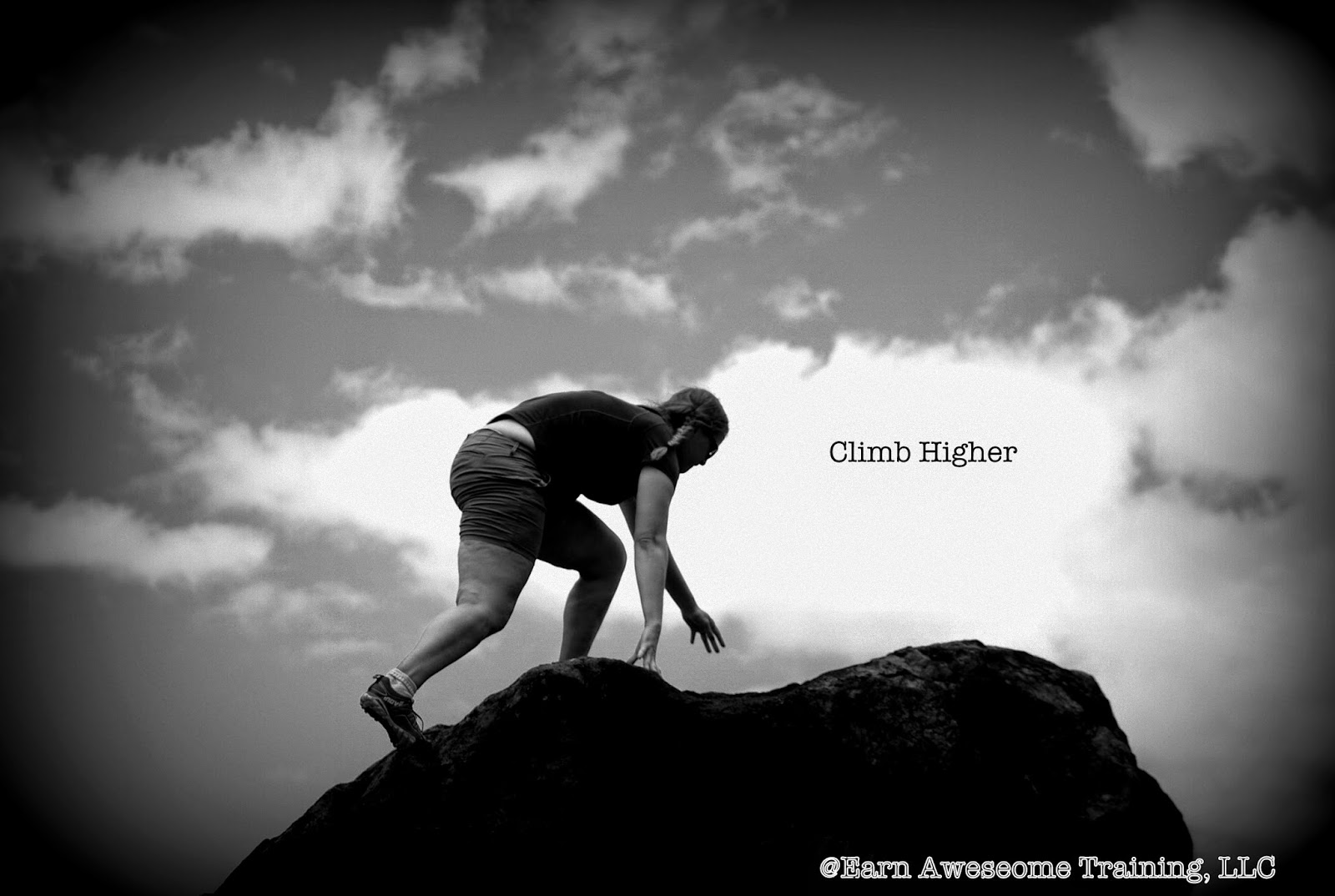 See - I don't think I'm too different from anyone else. We all have two inner voices inside. The one we listen to is the one that gets louder. Feeling ashamed of having those feelings and voices is pointless. It's part of the human experience. Beating myself up for feeling the way I feel just makes that negative voice LOUDER.  It's my scars and imperfections that make my story unique. Now, there is no erasing those negative voices, but, well, the dog you feed is the one that gets stronger. The challenge isn't in attempting to cleanse myself of all negative feelings.  It's in choosing to listen to the other voices. The ones that whisper that "I am Able". The one that whispers in awe, rather than the one that slams my esteem with sarcasm.


I have every reason (and then some) to be a victim. I could listen to that voice that wonders if my life is worth more than the $500 my parents paid for me (adoption fees).  I could drown in a pool of tears because My Sailor deploys and misses sharing milestones and holidays with me. And yes, I vent and complain from time to time. Why? Because I'm human.  I can choose to live in that place and complain all the time, or I can channel that towards something that makes me better. 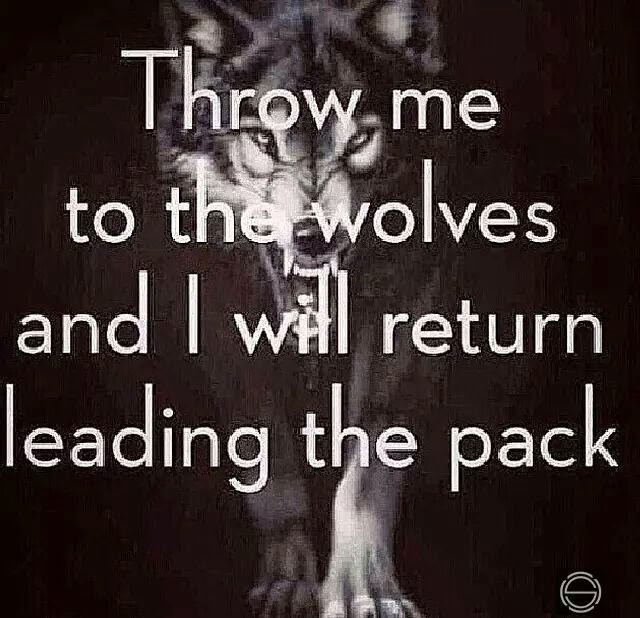 Never  Under estimate the scrappy nature of the underdog.
If you're a fellow under dog - Welcome to the pack.
As long as you are on this side of dirt,
You have the choice -

Be a Victim, or be a Fighter.