Best Laid Plans of Mice, Men, and Submarine Wives - And Time in a Bottle

Ever tried to pick out ONE Sailor in a sea of camo? It kinda feels like this - 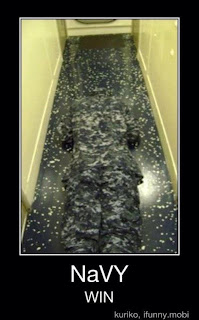 No matter how well you think you know your Sailor's face, when everyone is wearing the same thing, from hat (called a 'cover' in the Navy world) to boots, it's nearly impossible to pick out your sailor in a crowd, unless he's insanely tall or short or something. So I was pretty impressed when I picked My Sailor out of a crowd after having not seen him for a while. It's not as easy as it sounds. But it's a feat I accomplished from a distance in poor lighting and on short notice.

Now, I expected him to come home to a clean house, with a built fence, freshly cleaned carpet, washed dogs that smell decidedly-less doggy, folded laundry, a spotless kitchen, and a freshly decorated bedroom, and probably a few more inches off my hips.

Instead,
he came home to a sink full of dishes, folded laundry still sitting on the coffee table, floors that could use some vaccuming, dogs that were just as doggy as when he left, and a fence that consist of 2 posts - but hey! I managed to make the bed! And I dressed up! The weather actually was condusive to a nice little sundress out of my closet.

I had the pleasure of explaining my bumps and bruises to him, though they were far from the first thing he noticed, they were large and in charge and on the list.
We had a few hours together before the Navy had him back in those Camo's again, and I was back at my desk.

So plans change, as they so often do about here. So it's time to flex some of those Obscenely Flexible muscles. Sometimes plans change for the better (like getting unexpected time with My Sailor - yeah!)
And all we can do is roll with 'em.
So we flex our flexibility and roll with it.

But one thing I underestimated was the power of seeing My Sailor again. Though it's not the longest we've been apart, it might as well have been years.
It amazes me how some loves dwindle over distance, and others just get richer.
It isn't 'picking up where we left off.'
While that sounds obviously like what anyone in these situations would want, that's impossible. It's a lesson most military families learn quickly.
Life doesn't have a 'pause' button. And since deployment is part of this thing called life for some of us, you get the picture..
From the start, I believed the best way to honor
his work is to go out and use that freedom he (and others like him) are helping to protect.
So I go out!
I go out to meals. I relax and my favorite wine bar in town with a good book and discuss local events with the bartender.
I get to the gym and build my fitness.
I go grocery shopping for what I want when I want to.
I work until 2am.
I participate in events and in life where ever I choose.
I own 2 large dogs without having to have a permit for them.
I build a fence on my property because I own it and I get to make those decisions.
So, no, there is no pause button on life when these guys deploy. We may (at times) wish there was, but there isn't.
It's more like capturing time in a bottle.
Things still happen within that bottle that has "farewell" as the glass and "home" as the cork, you just spill it out all at once.
We call that 'homecoming.'
And oh, how sweet it is.
Posted by -J.D. Humenay at 9:47 PM